That Cable vs Television broadcaster debate

My good friend Ian Morrison at the Friends of Canadian Broadcasting is urging all of us to get involved in the great cable vs broadcasters debate. We have all seen the ads. How could we miss them, both sides have spend a small fortune in advertising.

To be honest, as I have said in earlier posts I find the television Broadcasters position a bit galling since they have done so much to undermine local television programming themselves over the last 30 years. But, some of the facts in this argument need a second look.

I urge you to follow this link and visit the Friends of Canadian Broadcasting site Read the info and use their automated link to write to the CRTC. It just takes a few seconds. The CRTC isn't known for making bold decisions and needs to hear from Canadians on the issue.
Posted by .Gord Hunter at 09:56 No comments: 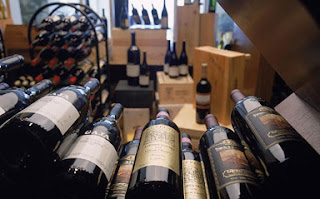 To be honest, I am not sure where I am on the issue. I have mixed feelings. A couple of years ago I'd have voted for privatization but selection in the Saskatchewan stores have improved dramatically and I am all for paying the staff a good wage. I suspect many private stores are sweatshops and we certainly don't want to go the route most American states have gone.

Generally these campaigns warn us about becoming like Alberta where liquor stores were moved into the private sector years ago. I never quite understood that argument since most of us take advantage of Alberta's cheaper prices, great wine selection and better choices when it comes to single malt scotches, every time we make the drive west. Sure, there some run down hole in the wall stores in Alberta but, I don't shop there.

Meanwhile the Saskatchewan Government has approved the establishment of two private specialty wine stores. One in Regina and the other in Saskatoon. I was just told the other day that the contract for the Regina store at least, has been given to someone living in Alberta. Now, to be honest, I am not surprised. The government in power is mostly run by small town and rural rubes who don't know much beyond running a dairy Queen much less a specialty wine store.

I'm willing to bet that no one on the Saskatchewan Party pork barrel list can tell a white Zinfandel from a Gewurztraminer so they thought the best thing to do was to consult their buddies in Alberta. A bad move. A specialty wine store is a sure winner and I'm willing to bet that someone here in Saskatchewan with a few bucks to invest knows his way around a vineyard.
Posted by .Gord Hunter at 09:15 No comments: