Brad Wall is off Base on MS


In the face of two new European studies debunking controversial Dr. Zamboni's "Liberation Treatment" for Multiple Sclerosis Saskatchewan's Premier figures damn the torpedoes. full speed ahead. Who knows what drives him but I'd wager it was a meeting with someone in small town Saskatchewan or from his church who came to him with a heart wrenching story about living with MS and not a well thought out strategy from within the Saskatchewan Ministry of Health.

When you run a government filled with members whose business experience is limited to small town Dairy Queens and implement dealerships and whose scientific knowledge is just about nil, you can get away with this kind of thing.

There is very little being said by the Saskatchewan medical community, they know enough not to bite the hand that feeds them. Speak out and it is easy pretty easy to find yourself replaced by an old party hack out here on the prairies.

The question if you ask me is "Why does Saskatchewan have the highest rate of MS in the country."

The Montreal Gazette reports that Dr. Jock Murray, a professor emeritus and founder of the Dalhousie Multiple Sclerosis Research Unit, said he doubts wall will get much support in his willingness to fund clinical trials.

"It's an unusual decision for a politician to select a specific therapy, unproven therapy, for a specific disease. It becomes then a political process. Whoever can put the most pressure on politicians will get the priority for medical research..."

What a way to run a health Care system. I thought there was a national strategy of some sort.
The next think we expect that Brad will do is to offer copper bracelets free to arthritis sufferers.

As long as there are crippling and fatal diseases out there will be desperate people keen to find alternative treatments.  I guess we have to be thankful that Brad wasn't in power when Laetrile treatments were the rage in Mexico. 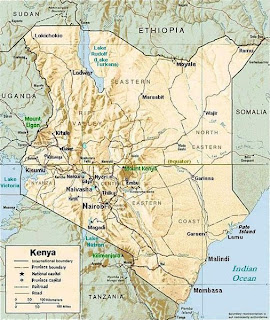 You may have noticed, buried in the back pages of your newspaper, that Kenyans voted yesterday to support their new constitution.

Kenya, which borders Somalia, Ethiopia, Sudan, Uganda and Tanzania, is the fourth largest economy in sub-Saharan Africa and has long been known for its corrupt politics.

This move certainly has the potential to reshape the political landscape in the country and it is an opportunity to move away from ethnic and tribal rule, bring in democratic rule and also should help the country focus on development and battling endemic corruption

The proposed constitution retains a presidential system but places checks on the executive. The president will now be impeachable and key appointments have to be submitted to parliamentary approval. The post of prime minister will be scrapped. A senate is created to include representatives of 47 newly-created counties. There a limitation on the number of ministers.

What makes this all interesting for me is that I have been reading M. G. Vassanji's The in-Between World of Vikram Lall, a book about an African born Asian man's lfe growing up in Kenya from his early years as Mau Mau violence swirled around him, the country's moves to self government and the massive corruption all too familiar when newly independent countries struggle with managing power in politics.


It is a story of a family's struggle with those changes and it is a story about corruption.

I you are interested at all about how this country got into the state it found itself in, I'd recommend giving this book a read.
Posted by .Gord Hunter at 10:19 No comments: