I Can Handle this Weather 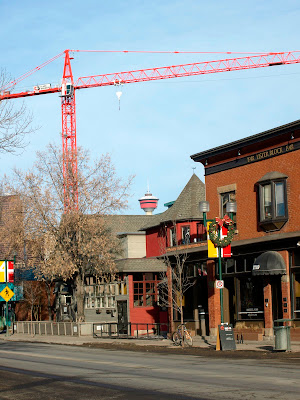 I drove to Calgary yesterday for a Western Canada Folk Festivals meeting. I always like the drive.

As a bonus was that as we approached Alberta the temperature started to rise. By lunch time in Medicine Hat it was 10 degrees. Very little snow in the fields and great pools of water in dugouts and ditches.

I have lived here a couple of times and these nice warm Chinooks got me through many a winter.

After the winter we have been having so far. It felt pretty good. I wish we could just figure out a way to extend their range to Regina.
Posted by .Gord Hunter at 07:23 No comments:

To be upfront, anyone who reads this blog will know I am no fan of CanWest but...

CanWest, it is reported owes money to 300 creditors who have taken them to court. They include the Saskatoon Salvation Army who the Globe & Mail says is owed over $54,000 . Speculation is that this represents money collected from the public by the Saskatoon Star Phoenix for the Sally Ann over Christmas as a part of a kind of Christmas fund.

Ah CanWest. You do Issy proud.
Posted by .Gord Hunter at 07:23 No comments:

I thought this Canadians Against Proroguing Parliament group warranted a few lines.

I don't remember an issue that caught the interest of Canadians of all political stripes so quickly. Having over 180,000 Canadians sign up to a Facebook site in a few short days is very impressive.

Even here in Saskatchewan where with our badly flawed first past the post voting system has given us pretty near, wall to wall Conservative MPs, there are demos planned for Regina, Saskatoon and Prince Albert.

Take a look at the video and on January 23rd, put on your coat and hat, get a bit of fresh air and let your voice be heard.
Posted by .Gord Hunter at 09:21 No comments:

What Happens When Politicians Go-rogue 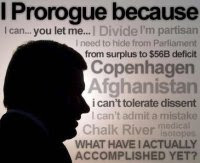 When all this prorogue business started I speculated that Canadians might not really care and, lulled into complacency by the idiot box, would probably just yawn. Much to my pleasant surprise, I think I was wrong. Our strange and awkward Prime Minister just may have over reached.

The Liberals and the gang in power, are neck and neck in the polls. A couple of weeks ago that didn't seem possible. Even the NDP who have been all but invisible, are up a few points.

You know Harper, who has a well earned reputation for running a one man show, is in trouble when he has to call out the likes of Tony Clement to fend off criticism. We all remember Tony Clement who was only saved from being completely discredited for his mismanagement of things during the listeria crisis by the bumbling Gerry "cracker" Ritz who only took his foot out of his mouth long enough to change feet.

Responding to one letter written by Fair Vote Canada and signed by leading Canadian political scientists and another by a group of academics from universities across Canada, Steve's friend Tony said that ordinary Canadians don’t consider prorogation to be a big issue.”I know it’s a big issue with the Ottawa media elite and some of the elites in our country" ...ordinary Canadians don't care.

But, hang on. Tony got it wrong. Demonstrations against the prorogation of parliament are planned in over 30 cities from coast to coast and to date over 180,000 Canadians have signed on to a Facebook site called Canadians Against Proroguing Parliament The number is growing so quickly that it is most likely already out of date.

Canadians are waking up to the fact that this government just isn't working and dispute their complacency about government in the past, they are pissed at Harper's manipulation of the parliamentary system to hide from tough questions about a long list of things.

Meanwhile, Parliamentary Budget Officer Kevin Page says, parliament may be prorogued but that doesn't that stop him from doing his work. Page plans to release three substantive reports in the run-up to the March budget.

The first suggests that the government is ignoring the change in demographics which is nipping at the government's heels. As baby boomers retire there will be hundreds of thousands of Canadians paying less income tax. That simply flies in the face of the government's plan to reduce corporate taxes and the GST combined with all their new spending announcements.

Stephen Harper can recalibrate all he wants but he doesn't seem to be in a position to actually fix anything. Remember how he ridiculed the Liberals for saying that tax increases were probable inevitable. Stand by for a change in plan on that front.

Stay tuned and see you at the demo on January 23rd.
Posted by .Gord Hunter at 08:10 No comments: