I would never claim to know a hell of a lot about economics but the little I do know sometimes makes me wonder if any of those reporting about the economy understand it any better than I do.

It isn't just the Leader-Post's, Miss Merry Sunshine approach to anything "Saskatchewean" but when the Globe & Mail looks at this province, they are almost as bad.

For months now, with horns blowing and trumpets blaring we are being told that Saskatchewan is on a roll economically. Not just on a roll but booming. No not really booming but, BOOMING. Brad Wall for Prime Minister some are shouting from the roof tops. He'd fit right in with the rest of those old Reform/Alliance/Conservative bunch and the, "Aw shucks" old small town boy schtick worked for Chretien so why not Wall.

Overall the Saskatchewan economy contracted by 6.3%. Down $2.5 billion in real GDP from 2008. Does that sound like a boom to you? For an economy the size of Saskatchewan's that is a fair chunk of change.

But don't worry Saskatchewan, considering the collective gooldfish memories of the Leader-Post editors, if there actually are any editors still working there, next week the papers will be full of boom stories all over again.

What Were They Thinking?

I was looking through the Hill Times this week when I noticed that the Professional Institute of the Public Service of Canada is holding a conference in Ottawa, in May.   David Lewis is the keynote speaker and David Suzuki and Preston Manning will discuss Speaking Science to Power. All in all it sounds like an interesting conference.

I did think that it was a bit ironic that the Welcome reception was being opened by Stockwell Day, no friend of science, someone who thinks that dinosours and people existed on the earth at the same time. Go figure.

A few Word about Democracy

I also find it a bit ironic that Prime Minister Stephen Harper, who tells Canadians that the loss of our young soldiers in Afghanistan  is the price which must be paid to bring democray to that country is the PrimeMinister who has done more to undermine democracy in this country than any Canadian political leader in recent memory.

The important decision made by the Speaker of the House yesterday is a small step, the first of many I hope, wrenching our country back toward a democracy which is more compatible with the democratic values Canadians hold dear.

Over the last year or so it seems that Rahim Jaffer met with several Conservative  staff member to discuss possible investment of government funding in some projests Jaffer was promoting.  Last week one minister admitted that his staff met with Jaffer in Calgary. A few days later it was revealed that they met in Ottawa, perhaps in Heleana Guergis' office.

Harper and the gang, have climbed up on their self-righteous high horses about it all, coming down on Jaffer from high heights. Wait a minute. Would someone explain to me why Jaffer is the bad guy and the Government ministers and their staff are blameless. The level of hipocracy is mind boggling.

As the British MP George Galloway affair gets rolled out in a Toronto courtroom week James Hiller questions in a letter to the old G&M how it is acceptable for the young Conservatives to bring hate monger Ann Coulter to Canada with the government's support while that same government worked to ban Galloway.
Posted by .Gord Hunter at 10:35 No comments:

Milliken Does the Right Thing 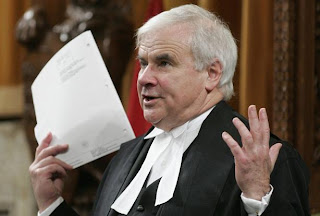 I have been edgy these last few days waiting for the Speaker of the House Peter Milliken to hand down his ruling about the release of uncensored documents to the Parliamentary Committee looking into the Afghan prisoner transfer issue. The Government had decided that it would only release documents which were so heavilly redacted so as to have no value what so ever.

Redacted is the current word used by the military and governments when they mean to say censored. Spin doctors have twisted the original meaning of the word to soften to public perception of their secrecy.

The majority of members in the house, in frustration at the government's secrecy, voted to find the government in contempt of Parliament. It was up to the Speaker to rule on their motion.

His judgement came down yesterday and he said in part,

Millekin has given the parties two weeks to work out how the documents will be released. If they cannot, he will decide.

The Speaker has a tough job but Millekin has risen to the occasion and should be lauded for his good work.
Posted by .Gord Hunter at 09:35 No comments: