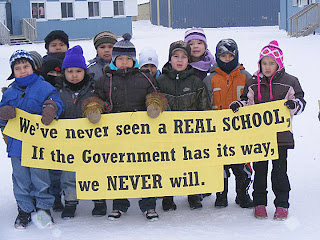 Who hasn't been watching the growing Idle No More movement and the stand-off between Chief Spence, now in the twenty some day of her hunger strike and the bully who calls himself our Prime Minister.

There is some very interesting stuff unfolding there. It could be the beginning of significant change in the way First Nations deal with government and vice versa.

On the other hand, after almost letting this issue get away from him, our illustrious PM just may have found a way to get things back, right where he wants them.

The really interesting thing is the First Nations' complicity in helping that happen.

First let's take a look at Attawapiskat Chief Theresa Spence and Saskatchewan's Emil Bell who joined her in a hunger strike to try and force Stephen Harper to take First nations' issues seriously.

A year ago Canadians, joined by people around the world were shocked by conditions on Chief Spence's reserve. People were in danger of freezing to death in their inadequate housing, the school was a delapitated shack and the community was rife with addiction. The government's first step was to blame the community leadership but eventually they were embarrassed into taking action.

A year later, seeing little change in her community Chief Spence took the drasitc action of embarking on a hunger strike. Hunger strikes are a great was to get attention to your cause, particularly if they last a while. After all, no group likes a death watch like the National media.

The problem with them is, unless you are prepared to go all the way, they lose their impact.

The First Nations' leadership's response to the hunger strike was telling. If they really were the group of activists they claim to be, scores of first Nations' leaders would have joined Spence by taking actions of their own. In their own communities and across the country. As far as I could see, they did bugger all.

Chief Spence first demanded a talk with Stephen Harper and the Governor General, refusing to talk to the Aboriginal Affairs Minister. A good move in some ways since the PM is a micro-manager and talking to the minions is a waste of time.

On the other hand Harper is as stubborn as they come.

Then Spence eventually softened her stand. She said it was ok if Harper at the very least set up a meaningful discussion. If I recall she wanted a couple of weeks of dialogue. We all knew that wasn't going to happen.

Meanwhile, the Idle No More movement has been growing and gaining momentum across Canada and internationally. Rail lines have been blocked, traffic slowed on highways and stopped on bridges and flash mobs have popped up in every major city in the country.

First Nations people and supporter were standing up in significant numbers demanding to be heard for the first time in years. A spontaneous non-hierarchical movement Idle No More was catching everyone's attention.

That was a problem for Harper and for the First Nation's Leadership. The chiefs, comfortable in their role around the big table began to see their authority being usurped by a rag tag group of grassroots protesters with a large and complex agenda and the PM who knew full well that it is much easier to bamboozle a group of leaders with low expectations, knew that finally something had to be done.

Harper agreed to a meeting.

The media characterize it as a win for Chief Spence. I don't agree. Harper won this round.

I simply cannot believe that anyone has any real expectations that any significant results will come from the Harper meeting. Knowing his past performance, the chiefs with be lucky to get two hours of face time with the PM.

Our Prime Minister is the king of empty promises.

No one should forget Stephen Harper's great "apology" to our First Nations for their treatment in the residential schools system. He said in part:

The government recognizes that the absence of an apology has been an impediment to healing and reconciliation. Therefore, on behalf of the Government of Canada and all Canadians, I stand before you, in this Chamber so central to our life as a country, to apologize to Aboriginal peoples for Canada's role in the Indian Residential Schools system.

He went on to say:

A cornerstone of the Settlement Agreement is the Indian Residential Schools Truth and Reconciliation Commission. This Commission presents a unique opportunity to educate all Canadians on the Indian Residential Schools system. It will be a positive step in forging a new relationship between Aboriginal peoples and other Canadians, a relationship based on the knowledge of our shared history, a respect for each other and a desire to move forward together with a renewed understanding that strong families, strong communities and vibrant cultures and traditions will contribute to a stronger Canada for all of us.

The media fawned all over the PM for his courage. First Nations leaders praised his leadership and humanity.

The reality of his promise rings hollow a few years later as his government has refused to provide needed documentation to the Truth and Reconciliation Commission to complete their task.The group has recently had to go to court in an effort to get the Harper government to comply with their obligations.

From my perspective the "apology" was little more that a deflection from Harper's scrapping of the Kelowna Accord crafted by former PM Paul Martin.

The accord was a result of 18 months of round table discussions between the government and First Nations leaders. The chiefs saw the accord as a step major forward. It was the result of a process of cooperation and consultation that brought all parties to the table.

The proposed education investment was to ensure that the high school graduation rate of aboriginal Canadians matched the rest of the population. The money was also aimed at cutting in half the gap in rates of post-secondary graduations.

In the area of health, targets were established to reduce infant mortality, youth suicide, childhood obesity and diabetes by 20 per cent in five years, and 50 per cent in 10 years. They also promised to double the number of health professionals in 10 years.


Harper scrapped the deal. His Conservative government has not engaged in consultations with First Nations in any meaningful way since.

So what should we expect.


Back to the status quo. What more could Harper want.