Election Fever - or Not 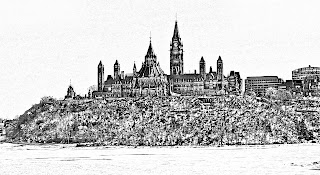 Last week I'd have bet anyone $100  that an election is in the works. All the signs were there. The Bloc, Liberals and NDP seemed to be singing from the same hymn book saying "We've had enough" and even the "Harper  Government" seemed to be keen to get to the polls.

By this morning the pundits seem to think that things are shifting a bit. Some of them anyway.

Me? I'm chomping at the bit. Canada needs an election now if only to try and get Canadians to pay attention. The "Harper Government" is running amok and even if the opposition can't take them down, those thugs need a good swift kick in the pants.

I  know its all about the economy blah...blah...blah but some one has to remind Harper that if the Canadian economy is doing well it has little to do with his economic policy and everything to do with monetary and banking regulations put in and maintained by years of Liberal rule. Harper lucked out. The economic meltdown came before he could dismantle the regulations that saved his, and our asses.

We need a little public debate.

It is times like this that I revert to my "If I was king" persona. So here goes.

If I were directing strategy for the opposition I would bring this government at the soonest possible moment.

Harper might win another minority but I very much doubt he can do better than that. So be it.

Then at the first possible opportunity the opposition should simply bring down the government again. The day after the election would be good. The next thing that would happen is that the Governor General would be obliged to see if anyone else could form government. Not withstanding Michelle Jean ruling, that is his job.

The Liberals and the NDP should then step up and form a coalition supported by the Bloc and hopefully a few Greens. Harper would scream bloody murder but who cares? A Liberal/NDP coalition government would have more legitimacy that a Conservative Government that 65% of Canadians didn't vote for.

In the next four years Canadians would see that there is nothing wrong with coalition government. After all aren't Canadians supposed to be proud of our historical ability to find workable compromise. A coalition would work like minority governments are supposed to. They stay in power through co-operation.

After all. What we have now isn't working.