Conservative Budgets out this Week 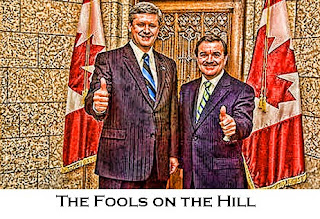 We are right in the middle of budget season. Both the Feds and the Saskatchewan government tabled their budgets this week.

I am quite taken by the fact that the media, particularly the CBC, is spending so much time and energy slicing and dicing the Harper Government's new offering, talking about what kind of impact it will have considering the fact that it hasn't a hope of going forward. The government will fall this week. No question.

If Harper wins another minority or, perish the thought a majority it will present a much different budget, you can depend on it.

What analysis I have heard sees the Federal offering as a kind of stay the course budget anyway. Pretty dull stuff. Not much to run on which will capture the hearts of Canadians except for a $75.00 rebate if you send your kids to music lessons. Pretty thin, I'd say.

I am always amazed at how the pundits continue to ignore the growing infrastructure crisis in Canada while praising corporate tax cuts.  It is a simple math economists don't seem to get. Pay less and promise more, Conservative economic policies don't work.

Here in Saskatchewan it is pretty much the same. The Saskatchewan party got elected at precisely the right time and the province is said to be booming so, these guys had a pretty good four years. Frankly I think it would have taken an idiot to fail in this economic climate. Brad has a few of those and still managed to come out smelling like a rose.

There really isn't too much worth commenting on but, I did like the following quote in the Leader Post obviously taken word for word from the press release "The provincial Budget released on Wednesday stated it will give beer off-sales retailers an extra $5.1 million to help remain strong contributors to the community"


I can't figure out how that works but it will certainly keep their small business supporters happy.
Posted by .Gord Hunter at 13:48