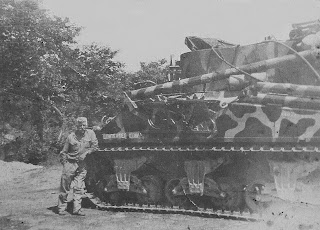 Late last week I went looking for some old photos of my father. When I was seven or eight he was shipped off to Korea to take part in the conflict there. I don't remember a great deal about it except that he brought us all back some really neat silk jackets he picked up in Japan on the way home.

He was a R.C.E.M.E. tank mechanic and as a Canadian Army sergeant he was in charge of a tank without a gun on the turret and which was fitted with a crane on the back. It was a sort of tow tank and carried the rather odd name, the Contented Cow. My father and his crew's role was to, at times, go to the front lines to repair and recover damaged tanks.

The photos I found were badly faded and creased. I photographed the old pictures with my camera then PhotoShopped them. I think they turned out rather well. There are a few more on my Flickr site.