I thought it was all About the Truth 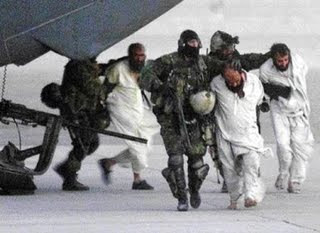 I find it ironic that as I write this blog this morning in Saskatoon, the building I am in is swarming with security personnel here to protect George “Dubya” Bush, one of the world’s most infamous war criminal/public speakers who did a great deal to get us all into the mess I am writing about.

I would guess that neither I, nor any reader really knows what the Government was told about prisoner abuse in Afghanistan. It has to make you wonder though, why Harper and his gang have fought so hard to keep people from testifying about it. I don’t know but, unless they are complicit in some way, why would the government not want the truth to come out.

Almost three and a half years ago Richard Colvin, a senior Canadian diplomat, sent the first of more than a dozen internal reports warning of the suspected torture and abuse suffered by Afghani detainees. He reported that soldiers in the Canadian Armed Forces routinely handed over prisoners to local "authorities," yet Harper's Conservative government apparently, has yet to hear of it officially

Moreover, that same government has done everything they can to stop Colvin from testifying. One has to ask, why would a career diplomat go public with the charge that he informed the government of his about Canada’s involvement in this abuse if it wasn’t the absolute truth. Surely his attempts to bring the truth forward are a significantly career limiting move.

On top of that, several civil servants who have been call to testify have been threatened with discipline if they do give evidence and worse, perhaps even face criminal charges.

Peter McKay, a politician whose credibility was severely tested during the Conservative/Reform merger, has come forward to say, the government never saw the scores of memos sent to it, about the prisoner abuse. When no one seemed to believe young Peter, Harper jumped into the fray backing up his defense minister.

Now the Chief of Defence staff is saying that he is going to do an investigation to find out what happened to the memos. Call me cynical but, that sounds to me like just another attempt to do just the opposite. Can you imagine the Chief of Defence staff coming forward and announcing that there were no problems with the flow of information and that everything was sent to government through the appropriate channels. This guy is in a tough spot. Don’t hold your breath if you are looking for clarity.

What is also interesting is that Rick Hillier has resurfaced. A good deal of these alleged abuses supposedly took place on his watch. In his new book, which is about to be released, retired general Rick Hillier clearly not happy with the PMO and their treatment of him. Perhaps that is another piece of the puzzle or on the other hand, perhaps the PMO's new strategy is to just piss everyone off.

So like I said, I guess we don’t know who is telling the truth. I don't know about you but my money is on Mr Colvin. I haven’t believed much Peter McKay or his boss have said for several years now.
Posted by .Gord Hunter at 18:09