It is Certainly Spring in Vancouver 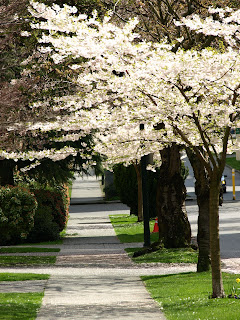 Penticton to Vancouver is a good drive. I just love the pine and grass hills between The Okanagan and Keremeos. The only problem was that it rained off and on the whole trip.

On the way down from Manning Park, in an area of steep hills and twisty road I passed a guy, with a backpack on a unicycle, working his way up the hill. That was when I knew for sure that I was in B.C.

Vancouver as always, is lovely. I drove into town in a light rain but during the short work I made of my fish and chips and a beer in what used to be the overlooking English Bay Cafe, it cleared off.

As I walked by the edge of Stanley Park three bald eagles were circling the heron rookery by the tennis courts causing quite an uproar from the nesting herons. A couple of braver herons harassed them for a while and eventually the eagles got bored and headed of to hunt somewhere else.

In the park, the walkers and cyclists were out in force and the sea wall would have been crowded had there not been a brisk westerly breeze.