The Nanton of Manitoba 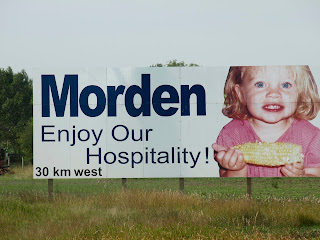 I always think of the drive from Kenora to Winnipeg as a short hop so I was a bit surprised that a side trip to Morden to visit friends seemed to take longer than I thought it would. And, to be honest the drive, down from the Trans-Canada Highway through Steinback and across country isn't the prettiest.

Morden though is a bit of a jewel on the prairie with lots of tall trees and stately old homes. It has a character many communities around here don't possess. It is a pretty little town.

I don't understand much about agriculture but something about the Morden's climate makes it great for sweet corn and apples so like Nanton in Alberta, Morden Manitoba is known for producing the sweetest corn around. "Better that Nanton" swears Vance. I am not sure I'd go that far but, it is at least as good.

Many Canadians tend to think of the Canadian prairies as one huge homogeneous climate zone but we couldn't be more wrong about that. The prairies are full of micro-climates and while any given community may be having a bumper crop while 20 km away, the crops are drying up in parched fields. I don't understand why but, despite how tough it is to produce corn in much of flat land country, Morden produces does a hell of a job at it. Not "as high as an elephant's eye" but sweet none the less.
Posted by .Gord Hunter at 09:20