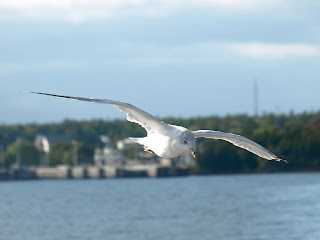 I was in the ferry line-up in Tobermoray at 7:00 this morning and they started to load the ferry Chi-Cheemaun about 1/2 hour before her 9:00 sailing time. It is a fair sized, the largest ferry on the great Lakes at 365 ft long and able to hold about 143 standard American cars.

The ferry runs between Tobermoray on the Bruce Peninsula and Manitoulin Island to the north. For those who are geographically challenged, it is on the edge of Georgian Bay. Music fans will remember Gordon Lightfoot's song Christian Island which is on also Georgian Bay but, alas nowhere near my route.

The first part of the trip is through the Fathom Five National Marine Park, a regular Parks Canada park, except underwater so, no camping sites or picnic tables. I couldn't see much, it was, you know, underwater.

The sailing was fun. as an old navy guy I just like ships but when we got to Manitoulin Island the crew followed that old ferry load-unload rule - first on, last off and I got stuck behind a number of American RVs.