Should we be Worried? 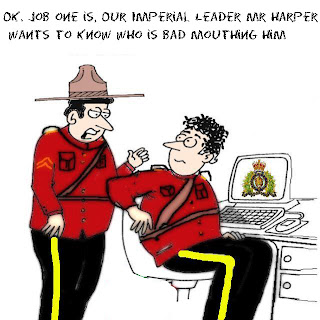 I often find it curious, the way issues seem to bounce off each other.

This morning's Globe and Mail has a page three story about Canada's Privacy Commissioner and her fight against some of the Internet's giants and the lack of respect given to privacy on the web.

It talked about her fight with Google and Facebook and the on-line dating site eHarmony as well as her discovery that Staples had been less that diligent about purging personal information from returned computer hard drives offered for re-sale.

Jennifer Staddart is a tough cookie determined to make sure your privacy is respected on the Internet.

It wasn't more than 10 minutes after reading the story that I checked my e-mail and found a link to an Open Media on-line petition warning me about what may be the greatest threat to our privacy. The Harper Government's proposed legislation which would allow the authorities to mine our computers for data without having to go through the bother of obtaining a warrant.

The government is trying to ram through an anti-Internet set of electronic surveillance laws that will invade your privacy and cost you money. The plan is to force every phone and Internet provider to surrender our personal information to "authorities" without a warrant.

This bizarre legislation will create Internet surveillance that is:

Warrantless: A range of "authorities" will have the ability to invade the private lives of law-abiding Canadians and our families using wired Internet and mobile devices, without a warrant or any justification.

Invasive and Dangerous: The laws leave our personal and financial information less secure and more susceptible to cybercrime.

Costly: Internet services providers may be forced to install millions of dollars worth of spying technology and the cost will be passed down to YOU.

The legislation, which in true Harper style is bundled with other "tough on crime" bills is described by the conservatives as one which will help track down "perverts and pedophiles." What could be wrong with that after all?

So is all this really a problem, or is Open Media over reacting? Internet expert and commentator Michael Giest thinks it is. He says:

There are several concerns with the Conservatives lawful access plans. First, it bears noting that these bills have never received extensive debate on the floor of the House of Commons and never been the subject of committee hearings. Police officers may support the legislation, but there has never been an opportunity to question them on the need for such legislation or on their ability to use lawful access powers if the bills become law. Federal and provincial privacy commissioners have expressed deep concerns about these bills, yet they have never had the opportunity to air those concerns before committee. Internet service providers, who face millions in additional costs - presumably passed along to consumers - have never appeared before committee. By making a commitment to passing lawful access within 100 days, the Conservatives are undertaking to pass legislation with enormous implications for the Internet that has never received parliamentary scrutiny and will receive limited attention.
Even that right wing rag Macleans Magazine is concerned.

Should we worry? I think so. All of us should be concerned but perhaps especially, guys like me, who spend the first few morning hours after coffee trying to hold the government's feet to the fire should take note.

These guys are mean spirited and I don't trust them as far as I can throw them and for our pudgy Prime Minister, that isn't too far.
Posted by .Gord Hunter at 10:20