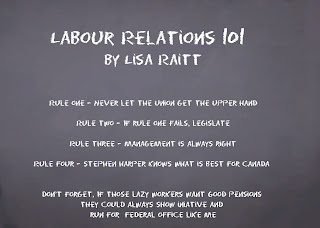 In a move that I thought bordered on an unfair labour practice Deepak Chopra, CEO of Canada Post, released a video message to unionized workers last week in which he said among other things that the union's demands would financially harm the Crown corporation.

I wondered who is this Deepak Chopra? So I Googled him. This what I found:

Deepak Chopra is a world-renowned authority in the field of mind-body healing, a best-selling author, and the founder of the Chopra Center for Wellbeing.

Heralded by Time Magazine as the "poet-prophet of alternative medicine," he is ,,,a global force in the field of human empowerment, Dr. Chopra is the prolific author of more than fifty-five books, including fourteen bestsellers on mind-body health, quantum mechanics, spirituality, and peace. Dr. Chopra's books have been published in more than eighty-five languages

The Canada Post head, appointed in January was touted to have wide experience and knowledge by Chuck Strahl, who was then Harper’s Transport Minister. At Chopra's appointment Strahl said "His extensive experience in dealing with government and postal officials around the world, as well as his vast knowledge of the regulatory bodies governing the mailing industry, will definitely be a strong asset to the corporation,"

I’m not sure what he knows about the mail but he how Conservative Governments work. He locked out the union workers, shut down the mail service and gave the Blue Meanies’ Lisa Raitt an excuse to introduce back to work legislation which she is expected to do later today.
Posted by .Gord Hunter at 13:40