Ok, we've got a few bucks. Lets spend it fast before the lean years come back. 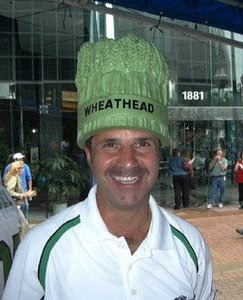 Well after being coy about building a new stadium to replace Taylor/Mosaic whatever it is Field, the politicians have now confirmed that there is a very good chance that they will go forward with the idea of building a new domed facility at a cost of about $350,000,000. They even know where they want to build it. Their plan is to situate the thing where the railway tracks now bisect the city. The land will be freed up when they get the new rail terminal build west of Regina.

At least that seems to be their plan. In the mean time they intend to spend $1,000,000 on a feasibility study. I wonder how one gets on to that gravy train.

Months ago when the first sniff of an idea was out there my good friend Vance Reed told me with some confidence exactly what, in his view, the best plan was. You guessed it, a domed stadium, exactly where they have now announced it will likely be built.

Now, I figure Vance would have given them his opinion for about $20.00 leaving about $999,980.00 that could have been put towards something practical like, fresh drinking water for reserves or housing for the less fortunate who will never ever be able to afford to go to the new stadium anyway. We can never find the money to make sure that underprivileged kids have enough to eat but some how we can always find an extra $350,000,000 tucked away for football fans. After all it is Riderville isn't it Pat?

But, there I go again, off on another rant.