Friday Night was a Great Show 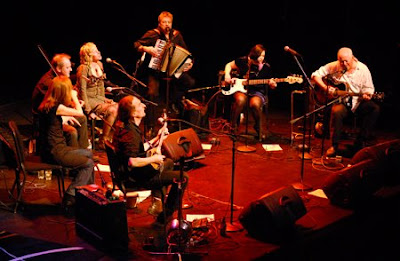 The Calgary Folk Music Festival put together a pretty good line up last night. I really liked Gomez, an inde rock band from the UK and the Decemberists put on a great show to end the night.

Early in the evening lineup was a group I’d never heard of, The Mekons are a band from Leeds that dates back to the late 1970s. They are billed as one of the longest-running and most prolific of the first-wave British punk rock bands around. I wasn’t sure I’d call they Punk. They reminded me of the Spirit of the West at times. I wouldn't be surprised if the Melkons were an infuence. Their lyrics are political and uncompromising and hard driving and rooted in what I think of as an older british, folk, rock, storytelling tradition.

The band was formed in 1977 by a group of University of Leeds art students. They took there name from the Mekon, an evil, super-intelligent Venusian featured in a British comic book from1950s-1960s

That isn't my picture by the way. I can't get close enough to get a good shot.
Posted by .Gord Hunter at 11:40