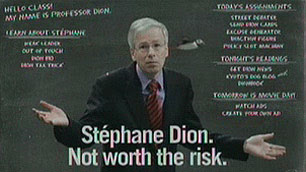 The Tory web page, which was active until Tuesday morning, featured an image of "Professor" Dion at a school blackboard, followed by puffin flying over his head and dropping excrement on Dion's shoulder.