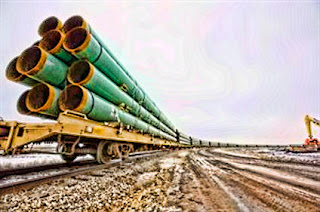 Before we do that however, what I suggest that we do,  is something that should have been done years ago, assuming we had any leaders in Ottawa, with backbone. That is to start the long overdue process of building pipelines around the Great Lakes and into Eastern Canada. Dig up those pipelines and insert a sharp left turn east of Regina and ship our own oil east. We then could open up some of those mothballed refineries east of Montreal and end our dependence on foreign oil.
Posted by .Gord Hunter at 10:12