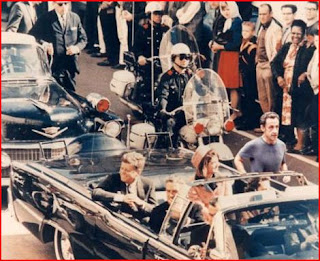 I live in a city with a newspaper, the Leader Post which can only be described as marginal. I wouldn't want you to think for a moment that I am slagging everyone at the LP however, they do have a few good journalists but, working for a CanWest paper they are starved for resources and I am not sure there is an editor in the place.

Saying that, I really do enjoy the Globe & Mail. Over the weekend I was reading Tabatha Southey's piece on Nicolas Sarkozy's attempt to put himself into the frame when the Berlin Wall came down, even though he was in Paris on the dates he claims to have been in Berlin. You can read it here. It is quite funny.

In the column Southey notes that people have been making fun of Sarkozy on the net, putting him into the frame in other historical events including the Kennedy motorcade which I have included in the blog.

That gives me wonder if Stephen Harper is really at all these events that the PMO insist be covered only by an "official" photographer excluding the working press photojournalists or, if he is really sitting with his feet up at home. I am sure the PMO can afford PhotoShop too.

That gives us a challenge I think.
Posted by .Gord Hunter at 10:47