Wednesday Donnie and I drove up to Campbell River for a CLC forum of the exportation of raw logs. It ended about 9:45 then we drove back to Naniamo to spend the night. We got in about 11:00 because we had to find a town to buy gas at on the drive down. We forgot that fill up bepfre you leave rule. We got to bed a bit after 1:00 and were up early to get the boat. 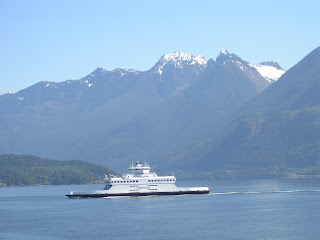 It was a long day's drive, 900 km. I started in Naniamo and when I caught the 8:30 ferry, dropped Donnie off in Vancouver and started east at about 11:00. It was a great day for a drive, It was magnificent up the Fraser Valley. Not a cloud in the sky. Mount Baker seemed huge and still covered in snow.
The drive up to Kamloops was good and right through Revelstoke the traffic was good and the skys were clear.
As I drove over Roger's Pass it started to cloud but it was still very pretty. There is still quite a bit of snow around the summit. I had to slow a bit east of the top where they are still clearing mudslides but by the time I went through it was in good shape.
There was fresh snow around Lake Louise and Banff but when I stopped for the night there was nothing much on the gound in Canmore. I saw a number of elk around Lake Louise and a couple of deer. Had to deal with the usual idiot braking hard so he can pull over to take pictures. I think that is why the speed limit is lower in the past. It gives you time to avoid running into stupid tourists.
Posted by .Gord Hunter at 23:46