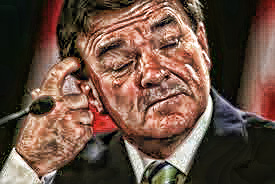 I notice that Harper's Conservatives are taking the same approach to the much needed Canada Pension Plan reform that they do the the environment. And, why not? Ignoring the problem works for them and after all, the chickens won't come home to roost until this bunch are long gone.
Federal Finance Minister Jim Flaherty says this is not the time for an overhaul of the pension system. The problem is of course is that there never us a "good" time to cough up the extra cash needed and by the time the shit hits the fan, I predict the government in power, whatever party is in power will say, "If Harper had dealt with this at the time it could have been fixed but...we are too far down the road and we just can't afford to do in now."
Boomers, most of whom are still working will start to put real pressure on the plan as they retire and tap into the fund. When the bills come, it will be our kids who will pay for Harper's inaction.
The Harper government claims to have been working on what they said was serious pension reform for 18 months and what we get instead of reform is just more inaction.
To be honest, I didn't really expect much more out of this government but I had hoped that, just perhaps, the provinces would step up. Six of the ten provinces supported action but unfortunately Alberta and Quebec supported by the Saskatchewan Wall government worked against reform.
Posted by .Gord Hunter at 08:36